ENVIRONMENTS PT. I: Conversations with a Plant

How to Generate Biofeedback Melodies 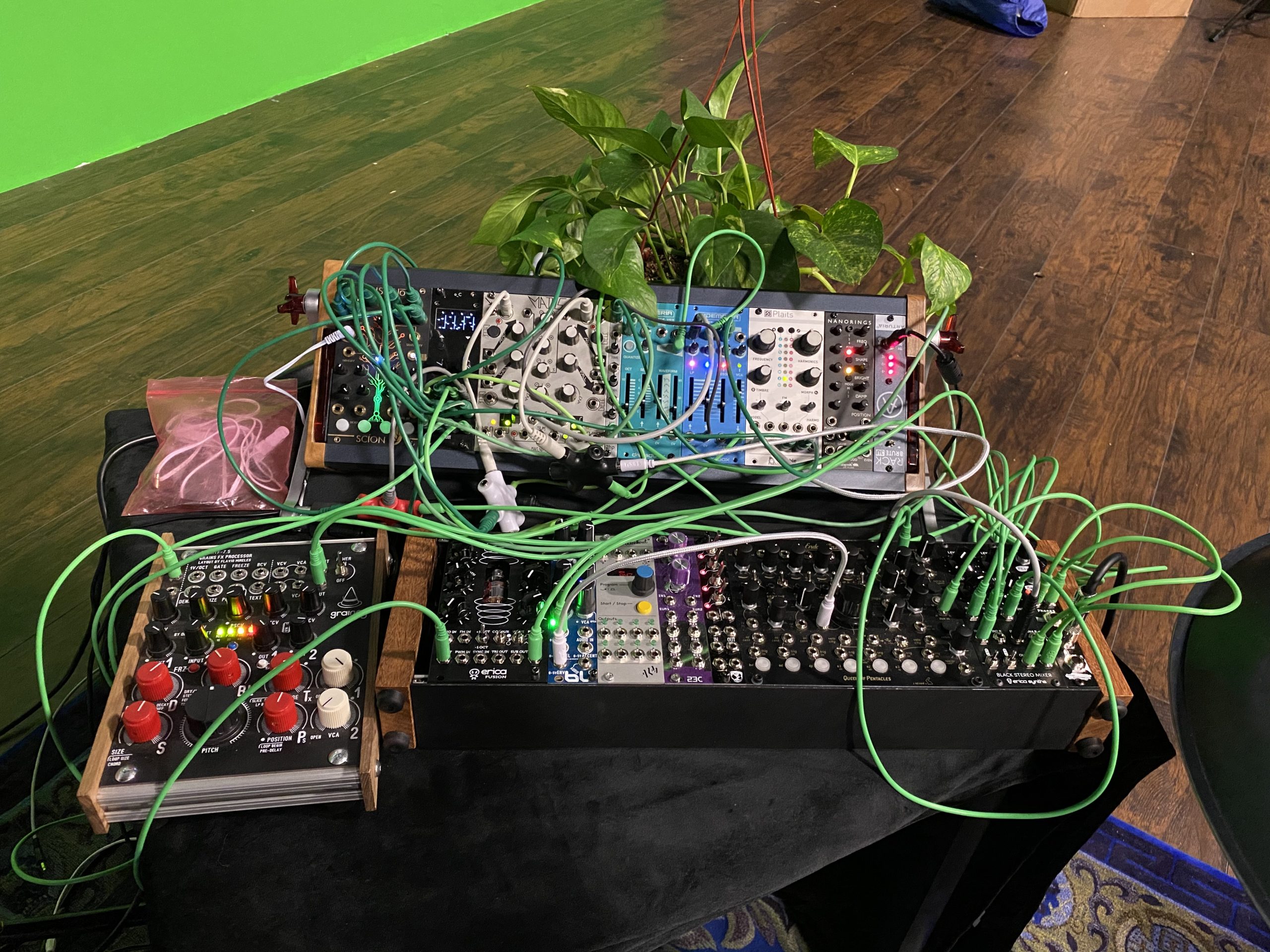 Creating self-generative music has been a long-term goal of mine since I began my
hardware synthesis journey in 2018. The resurgence of modular synthesis, particularly
Eurorack, has led to a parallel rising interest in ambient generative music. With the learning
curve of Eurorack being so steep, I focused on conventional patching techniques for at least the
first year of using Eurorack. Almost all of my patches included a central clock source, which led
to most of my patches being rhythmic and generally stayed in the realm of dance music. It
wasn’t until I was introduced to the Instruo Scion that I could break out of that format, and turn to
a more generative workflow.

The Instruo Scion is a Eurorack module that generates four channels of randomized
control voltages based on a biofeedback sensor. This allows any organic surface to generate
the signal, via a pair of nodes that stick to skin, leaves, or other organic matter. With the Scion
being the source of CV in the rack, the next step was to pair it with a set of modules that would
offer the right tone and control for an ambient performance.

Since the Scion outputs four randomized control voltages, the signal must be quantized
to lock the pitch to a musical scale. To achieve this, I added an Ornament & Crime to the rack.
O&C has four separate channels of quantization, which works perfectly with the four output
channels of Scion. Scion even has four random gate outputs to step each sequence of O&C
forward independently. The next step was to determine the voices in the rack; since there are
four channels of pitch information, my goal was to add four voices. The voices I chose were the
Dreadbox Hysteria, Mutable Instruments Plaits, Nano rings (MI Rings), and Erica Synths Fusion
VCO2.

After I selected the voices, the rack was still lacking control and effects. To solve this, I
added a Dreadbox Eudemonia Filter to tame some of the signals and add some modulation
options. The Eudemonia has three inputs, so I summed Hysteria & Plaits into it. I threw a Make
Noise Maths into the rack to cover my bases or envelopes and attenuation. The output of
Eudemonia sent through a Blue Lantern Grains (MI Clouds), while Nanorings passed through a
2hp Delay. I didn’t have space in the racks to add a filter for the Erica Synths voice, so I ran it
through the Aux input of the Endorphins Queen of Pentacles. This allowed me to use the master
bus filter for low pass and high pass, and the onboard effects as well. 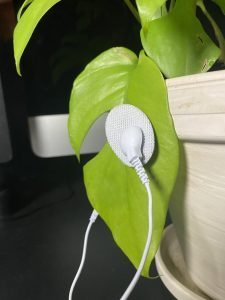 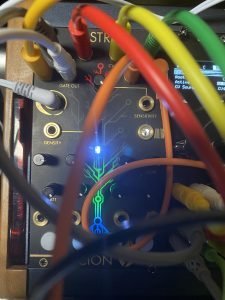 I assembled a small percussion kit to play alongside the modular racks, which included a
Meinl Cajon & Djembe, and an Elaia Hangdrum. Ornament & Crime offers dozens of scales for
pitch quantization, so I was able to find a scale that matched the hangdrum and djembe. After
about an hour of patching and troubleshooting, all four voices were finally in tune and dialed in.
The basis of the performance was to slowly introduce each voice, while controlling the dynamics
using filters and depth of the envelopes. The Scion has controls for density and sensitivity,
which change the rate at which it generates triggers, and the range of CV. These controls
allowed control over the range of arpeggios sent to Rings, Plaits, and Hysteria, while the Fusion
VCO2 held sustained root bass notes.

The selection of the plant actually made more of a difference in the performance than I
expected. I had planned to use a small monstera plant, and had even tested with the same plant
prior, but on the day of the performance it got camera shy and wouldn’t generate many triggers.
It could have been that placing the nodes on the leaves wasn’t very conductive, but I ended up
swapping it for one of the studio plants, which seemed to work fine.

The Instruo Scion is an inspiring module to use, which forces a unique approach to
creating a modular patch. It spurred the idea for the performance, set design, and the
Environments series. Building this compact system to harness the randomized signals also
pushed my understanding of how to assemble a new type or rack. I also see this patch as the
first step to understanding how to make generative music, and I look forward to what surprises
Eurorack will reveal to me in future patches. 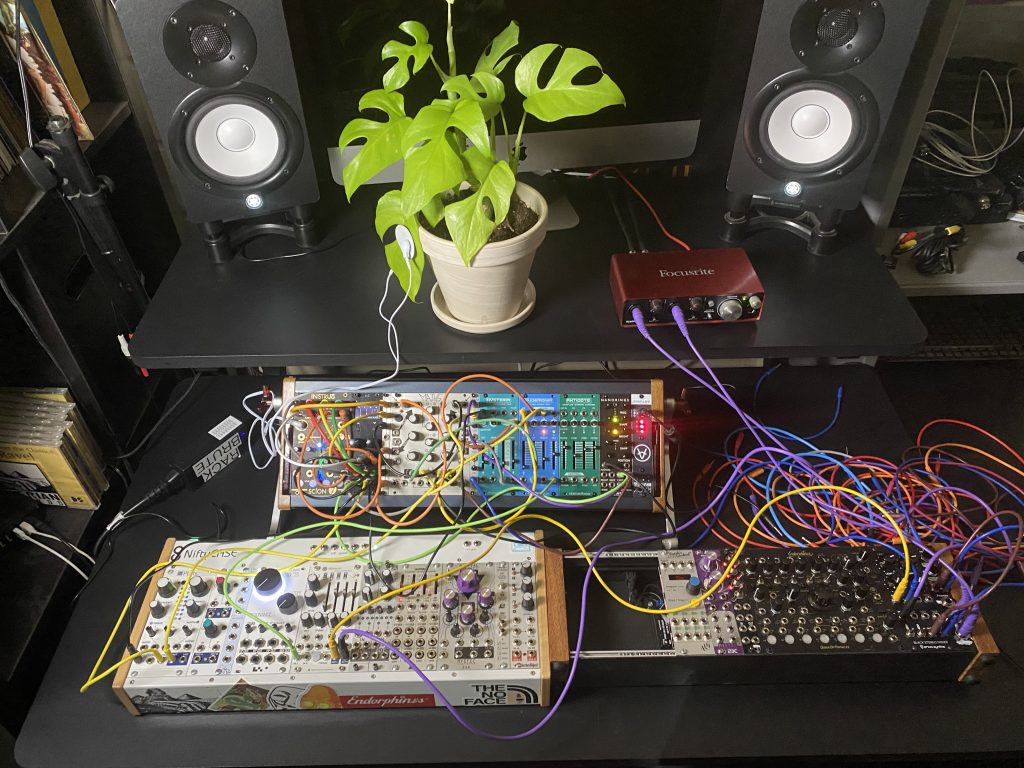 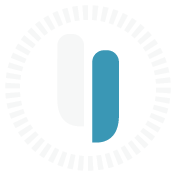